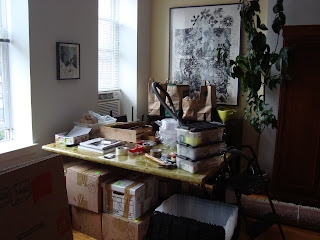 I’m moving. That ranks first, third and not at all on the list of 10 most stressful things in life you can do, depending on which list you consult. Interestingly enough: the list that did NOT list moving as one of the 10 most stressful things to do DID list three versions of breakup, jail term, marriage and pregnancy. Which goes to proof that being single was a very smart choice. It cuts down the clutter of stress lists to bereavement, moving and jail term, the latter of which I (so far) have been able to avoid. But moving I now must.

But what happens to “moving”, when it becomes: “I thought I was moving, but now I might be moving next week, but maybe I won’t move next week but next month instead?” I think it goes off the chart of stressful and into a list all of its own, filed somewhere under: “it’s complicated”, “I don’t want to talk about it”, “great excuse to excuse yourself and not be on time, not find ANYTHING, live in a mess, have cracked fingernails and a constant dust allergy cold and in general be in a real foul mood” – after all you ARE super stressed!

I’m living in boxes. Box #16 holds a lot of the stuff I packed when I thought I’d move next week and I’ve been eyeing #16. Do I open #16? If I open #16 do I also open #2 which also has stuff I need? Do I learn to life without content of box #16 and #2? What precedent do I set if I start opening boxes? Will I fill them with OTHER stuff and rewrite the packing list, or will I leave #16 open and put the stuff back in just before I move?

No wonder moving is stressful.

Everything I take into my hands now is suspiciously eyed under the scrutiny of a move pending, not confirmed, but happening somewhere in the near (or not so near) future. Will this be an item that goes into one of the ‘last minute’ boxes? How many of those ‘last minute’ boxes will I have? Do I pack them the morning of the move or the night before? What could happen that would make this item unnegotiable necessity? Do I need this thing for my summer vacation? Will I move before or after?… arghhhh.

I’m moving; and I will have a new address – soon.