Video for Non-Profits: a Start

I’ve been doing a fair amount of research on how to harness today’s tools and create video content for small businesses and non-profits. I came across a tutorial on YouTube that was quite nicely done, if in my eyes not quite complete and, as it was done in 2010 with older – if brilliant – technology. 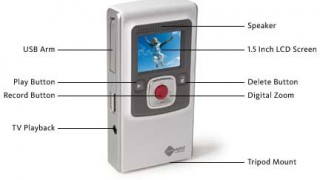 The Flip camera was a genius idea and the first in it’s class, and into that class I would put today’s iPhones. I had every model of it and loved it for its simplicity and quality – the last model shot in high definition. You aimed, shot, and then edited your footage on your computer, but with software that was embedded on the camera. It was so simple and easy, that “even a caveman could do it” (thanks Geico).  Cisco, which brought the Flip to market around 2009, sponsored a 5-part video series on video content for non-profits shot and edited with the Flip Camera in 2010 and made it available on YouTube.

Part 2, 3 and 4 hold up very nicely. There is just enough information to not overwhelm, but the is enough detail to give a good overview of video production with the Flip.

Part 1 talks about the emotional power of video with an all graphic animation clip loaded with statistics, which in my opinion, defeats the purpose of the entire series. Should it be: “do as you say”. Which brings me to the observation that the video series itself was probably NOT shot on a Flip. Or, if it was, it’s not being credited. I think that’s a huge opportunity missed by Cisco. The entire Flip idea was ahead of it’s time and should have taken the world by storm and didn’t. Cisco did not understand what I had on its hands, developed the product in the wrong direction and finally pulled the plug in 2011. Robert Capps of WIRED Magazine explains why in his article Bye, Flip. We’ll Miss You. Finally, Part 5 shows off the final video.

Overall I’m missing a few crucial steps in the process. Although there is mention about needing releases from all people appearing on camera, there is not mention of licensing rights for music for instance. And much more importantly there is no talk about the context(s) within which the video will play at the onset of the process and no mention of distribution at the end.

Where and how and to whom is this video shown? Crucial questions that impact the branding and content of a video, as well as shooting techniques and editing choices. These are the first questions I start any conversation with a client.