How to Approach a Video Budget

Part 1 of 4 on Budgeting for Video Marketing

Most people don’t like to talk about money, but budgets are an essential part of any video production and budgets come into play right after an idea has hatched. 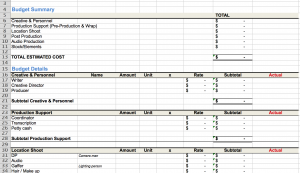 Video is not a solitary craft or art form, it’s a team sport. How often have I wished I was a writer, or a painter, or anything else but a filmmaker; how much easier would it be to get financing and create without the worry of money. But let’s face it: the power of video lies in its capability to engage all the senses, both actively and subconsciously and for that it takes great ideas, technology, time, craftspeople, artists, and project management.

The good news is that technology is at a point where pretty much anybody with an eyeball and half a brain can create something. But, don’t kid yourself, and always remember:

If you have lots of time on hand: go the do-it-yourself route and hope that you have a knack for filmmaking and all that comes with. If you don’t have lots of time – and who does these days – you’ll have to spend money, but with the right guidance you can achieve solid results without breaking the piggy bank.

What a budget really is: A blueprint

Most people shutter at the mention of the world ‘budget’. But the budget is so much more than just dollar amounts. A budget is the blueprint for the entire production process: it informs creative decisions, the production schedule, crew size and pay, not to mention post-production goodies like graphics, music, and everything else that goes into producing a video. The most common question asked in video production is: “is that in the budget”?

As you might be able to tell: I love budgets. I was taught to budget by a veteran commercial producer, Paul Kramer, back in the 90ies; he walked me through the standard TV commercial budget, showed me how it is a checklist against which you made sure nothing was forgotten, and a that budgeting wasn’t all that hard: All it took was good judgment and some experience.

I’ve used the same basic principals Paul taught me to budget feature films, my documentary, million dollar corporate video productions, and anything in-between. A budget template forces me to think a project through, schedule it and break it into its line items. And that’s why I love budgeting so much: the project is still in its virgin state. It exists as a concept and it comes to live with my budgeting. No one has messed with it yet. I control it, I can play with it I can reverse engineer it, I can highball it, and lowbrow it – which I often do – so I know where my breaking points are. For a fleeting moment all is perfect and in order before production madness ensues.

A production never turns out exactly how it’s imagined. The moment you start talking to all the stakeholders new ideas emerge, technical issues arise, timing and availability of people and locations throw off the perfect production schedule, and etc. But with a solid budget, that is to say, a solid blueprint for your production, you can be flexible and agile and know where to say ‘yes’ and where to push back.

As the Dalai Lama says: “Know the rules well, so you can break them effectively”.

Get a free, blank excel budget template: sign up below!