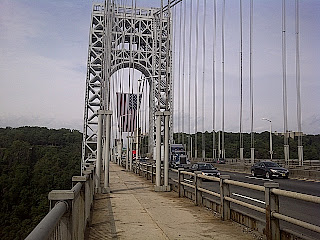 So much is being said and will still be said on the 10th anniversary of the September 11, 2001 attacks on New York. And as a New Yorker there are so many thoughts, memories, emotions and questions that do come up in these days as the coverage of the anniversary is steering towards a media overload. And here I am feeding the beast.
My personal story is thankfully rather dull – despite this there is a very nice article in a Swiss magazine that talks to eight Swiss New Yorkers who experienced the 9/11 tragedy and are still in New York. The journalist, Ralf Kaminski did an outstanding job recording and writing the eight stories. And reading them – in their simplicity – they are so revealing and relevant. For those of you who speak German here goes a link to the Migros Magazine article.
I would love to write about the broader scale of the changes in the past ten years and how we all have to move into this or that direction and make this a better and safer and smarter city and country, but I won’t.
The ten year anniversary ways heavy on my heart and I just want to say that I’m thinking of those who have lost loved ones and still are struggling and congratulate those who have had the strength and courage to move on and rebuild.
I know many who woke up a few weeks and months after 9/11 and changed their lives for the better, who stayed strong for their children and those who needed it the most. You are the real heroes in my mind. And like the small stories in the Swiss Magazine, it’s all the small stories here in New York and everywhere that make the difference. One day at a time and one action at a time. Onwards and upwards.