Some Thoughts on Live Video Streaming for Small Business 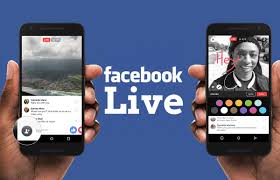 When my friend Larry Velez of Sinu called for advice on how to best shoot a talk-show format video with Facebook Live my ears perked up.

When Larry is interested in something I pay attention: One: He’s a visionary, two: He’s in the tech field, and three: He envisioned and built from scratch a wildly successful IT service company with technology that was in its infancy back then. He understood how to harness it, make it work for small businesses, and scale it. So, when Larry calls, I’m listening.January 2016, all the “trends for this and that” articles I came across hardly mentioned live video streaming, and if they did, they weren’t sure what to do with it. I went the same route, with Video Marketing & Production Trends, 2016, mentioning Perisocpe and Blab, but within the context of video content, not its usage.

Today you can’t run fast enough to get away from live video streaming. Those of you who read me regularly know my mantra of “content is king” and, “don’t get side-tracked” by next shiny new thing, aka technology, platform, app, camera, etc.

Facebook’s buy-in into live streaming with Facebook Live has catapulted video streaming into the mainstream. As we all compete for eyeballs (that is people’s attention), video is the fastest way to convey the most information in the shortest time (especially to Millennials and younger). Live video streaming is a perfect blend of social media and video.

The numbers for Twitter’s live streaming app Periscope are impressive: 15% of top brands use it for their marketing efforts, 350 000 hours a day are being watched on Periscope, and 200 million broadcasts have been aired. Brands use Periscope for sneak previews, live Q&A’s, celebrity ‘takeovers’, and product presentations. (Source: SocialMediaToday.com)

What does this mean for the small business owner and solopreneur: Live video streaming is, well, live! It’s one thing to show off attending a concert with running commentary, or experiencing something cool you want to share: You are the observer and it’s understood that what you are sharing is happening live and is out of your immediate control.

Turning the camera around onto you and your business is an entirely different matter. Yes, currently live streaming gets more ‘likes’ than anything else on Facebook, but understand that a ‘like’ does not equal a ‘watch’, AND understand that live video streaming is the latest shiny toy (see above!), a factor, that influences the ‘likes’ as well.

Larry sent me a link of Gary Vanyerchuck doing a live stream with Al Roker. First of all, those two are total pros in front of the camera: Period.

Secondly: If you are watching at the stream, look at the reflection of the glass behind Gary and Al. Can you see all the peeps, the big camera on a tripod, the microphone boom? Yes? All that comes with a bill and a serious time commitment.

As small business owners we have few marketing dollars to spend and even if video streaming looks totally effortlessly, easy and cheap: It’s not! And, it’s MORE work than a pre-produced video, because you have to get it right the first time and your only time.

I’d say: stick with pre-produced video for now, get dedicated eyeballs that actually WATCH your video, and keep an eye on live streaming and how it’s being used by your peers.

Yes, we all are talking about needing video today. Yes, video is a medium, but the medium is also the message (Sic: Marshall McLuhan) they are in a symbiotic relationship to one another. Video isn’t cool for the sake of video: It is cool, because the medium delivers layered messaging beyond words, or an image. Video is the full delivery package that delivers, content, emotion, and sub-context at the same time. Video is not the fad, but it’s delivery mechanisms might…

Live Streaming is here to stay for sure, and I’m keeping a keen eye on Facebook Live, Periscope, YouTube Live, and Amazon’s Twitch. After all, by 2019 we expect 80% of all internet traffic to be video – most of it is going to have to be live – the question is: How will YOU be able to make it work for your small business?

Watch some tips my friend Lisa Larson-Kelley came up with for a successful first Facebook Live adventure in this weeks episode of her deliciously entertaining YouTube channel Brain Snacks!

If you are using live video streaming, or have seen it used in a ways that work for small business: share! And, when Larry goes live, I’ll let you know.

For samples and inspiration, search “live streaming” on Facebook.